Showing posts from April, 2011
Show all

L to R: Moderator from Museum of Arts and Design, "Behind Jim Jarmusch" director Lea Rinaldi, actor Isaach De Bankole, 4/29/11, NYC Let me clarify that title above - of course anything can be symbolic - can hold a meaning other than what is primarily presented in a given object, story, or person, but, what I wanted to find out was that as an actor, when faced with a scene such as the one where De Bankole's character tells Bill Murray's character in the fortress scene that he (the hit man/De Bankole) got into the well guarded facility using his imagination, was that statement in the script accepted as truth in the real world (of the movie) by him (De Bankole, the actor, in playing the character, as opposed to the scene being a dream sequence, a fantasy, or a symbolic/not-real scene)? De Bankole said it - the statement/the event - was real. Further explanation: my question to De Bankole was how exactly did the hit man use his imagination to get into the w
Post a Comment
Read more

What's up with all the Elvis Mitchell hate?

- April 26, 2011
Here's Anne Thompson's reaction to a fellow film critic losing a job, pretty evil. That's just one of a dozen similar articles out there. But on the bright side, here's Kim Voynar's reaction to the firing, pretty classy. Anyway, back to the question - what's with all the hate re: Mitchell? Probably due to jealousy. So, the future (that's the closest I can come to a Source Code reference at this time)? Mitchell will no doubt land another great gig, his supporters & friends will be happy, & the haters will either keep on hating or work on their writing & other creative skills so that they too may be able to one day experience the kind of success Mitchell has experienced . Really, has Anne Thompson appeared in Entourage playing herself - or will she ever? I don't think so. What all this drama shows is that Mitchell is a genuine rock star film critic (perhaps the only one right now?). So whoever hires him next will benefit not only fro
Post a Comment
Read more

a statue of a diy filmmaker is up in new york 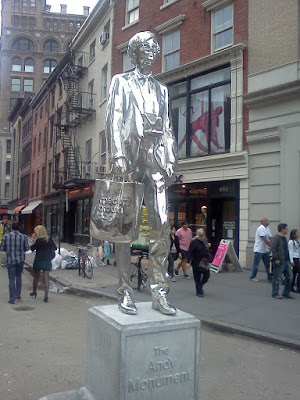 - April 22, 2011
But to some in the indie film world, this is a new reality - check out the shock & the sadness at this post by Ted Hope. Indie film, for the most part, is art film people. Anything art will always require financial support from sources other than revenue generated by the selling of the said art (there are some exceptions to this view from time to time, of course). But, on the other hand, it is only a short walk from art film to entertainment/most Hollywood type filmmaking - so, make a genre film every once in a while, distribute it, & see if u can pay some bills with the $s gained. Anyway, everyone dies eventually, so might as well spend your time on Earth doing something that you love or at least enjoy a lot. So, if indie filmmaking is your choice for that, then enjoy it, & if you gotta have some day jobs in order to make it happen, then enjoy that part of being an indie filmmaker also. - S :: :: :: :: :: ADVERTISING New blogs for projects by NYC artist Ka
2 comments
Read more

- April 14, 2011
Saw " Blank City ", doc about NYC underground film in the 1970's & 80's at the IFC Center last night. I think the neighborhood that IFC Center is at now was probably the same neighborhood that the filmmakers in the doc were hanging out in back in the day - in its rougher, run down incarnation. Anyway, about the doc - great if you are a fan of any of the artists featured in the doc - and me being a huge fan of Jarmusch movies it was a treat to connect some dots as to how films such as Stranger Than Paradise came to be. When I first saw Stranger in film school in the early 90's it seemed as if the film was beamed to earth from an alien planet, 'cause everything about it was far different from movies I had seen up to then - but now it turns out that there was a whole bunch of people & ideas that contributed to the eventual style that broke out into the world via Stranger. The scene at the screening was fun - people talked with each other - strangers - a b
3 comments
Read more

They said they were shooting a show called Prime Suspect 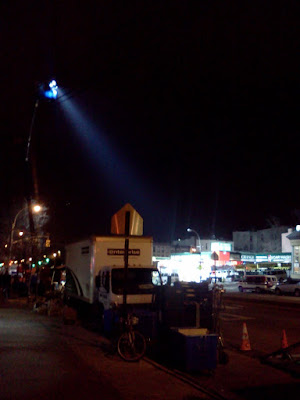 Some of what I saw when walking home from work today.
Post a Comment
Read more
More posts