Showing posts from April, 2009
Show all

Is there a second generation Iranian-American/Iranian-European "New Wave" happening?

- April 30, 2009
10 years ago (1999) I did not know of - did not hear about in the media - about a single art film director who is 2nd generation Iranian-American or Iranian-European. Now I know of 4 - three well known in the art/indie/foreign film world & one who just made a very promising first feature. Here are the names & some links: Caveh Zahedi ( I Am A Sex Addict ) Ramin Bahrani (Man Push Cart, Chop Shop, Goodbye Solo) Marjane Satrapi ( Persepolis ) &, just entering the feature filmmaking arena: Amir Motlagh ( Whale ) So is this a new & significant development? I'd like to hear from people who know a lot about creativity in the Iranian diaspora & about art/indie/foreign films in Comments. - Sujewa :: ADVERTISEMENT :: Farzad Rostami Delaware Tobacco blog http://farzadrostamidelawaretobacco.blogspot.com Farzad Rostami Delaware Tobacco 2 blog http://farzadrostamidelawaretobacco2.blogspot.com Farzad Rostami Delaware Tobacco 3 bl
Post a Comment
Read more

The Limits of Control may have some elements in common with The Matrix, says O'Hehir & Jarmusch :: Release expansion plans

- April 30, 2009
I plan on watching The Limits of Control on Sunday, so, I am wondering if I'll encounter a sublime, mind-altering Jarmusch film like Mystery Train or something far more difficult to get into & enjoy like Coffee & Cigarettes or Year of the Horse. This interview with Jarmusch by Salon's Andrew O'Hehir makes the movie sound very interesting. From the intro to the interview: "But the suave hero, the sharp clothes, the noirish atmosphere and the spectacular settings are only one layer of the onion. Jarmusch's title is meant to be metaphysically suggestive, referring not just to the limits of political control (that's a clue, but not a spoiler) but also to the fact that the movie itself is a fiction, and to the possibility that the world is not what we perceive it to be. There are hints that De Bankolé is able to control the landscape around him, at least at times, almost like the author of a story or like Keanu Reeves in "The Matrix."" A
Post a Comment
Read more

- April 29, 2009
whale_feature film trailer_director Amir Motlagh from Amir Motlagh on Vimeo . Amir Motlagh is a Los Angeles area based independent filmmaker & actor. After winning accolades from film festivals and web audiences for several short fiction & documentary pieces, Motlagh recently completed Whale - his first feature length film, a beautifully shot & edited work of fiction about an aspiring writer who returns to his parent's house to figure out the next phase of his life. I spoke with him recently about Whale, certain trends & other happenings in the indie film world - including the existence of several well regarded independent filmmakers with Iranian roots: Sujewa : What was the starting point for Whale? What experiences, other movies, career needs, other things led you to create Whale? Amir : Maybe I started Whale abstractly in 2001. It was the first film I had ever envisioned making, but I didn't have the know-how, resources and understanding of the film
3 comments
Read more

New limits set, Feed back on

- April 26, 2009
Over the last few years - starting in '04 - I've done quite a bit with blogs: posted over 2,000 entries, made new friends, made a doc about blogging (screened it in NYC & made it a part of the recent Atlanta Film Festival) & learned a little about engineering & managing indie film publicity. Now I plan on applying a similar productive approach to making & distributing indie movies - less blogging, more film work in its place. So, in that spirit, coming very soon (working on these items now, should be up on the web w/in the next 7 days): - All of Indie Film Blogger Road Trip to Vimeo, Blip.TV, & YouTube in episodes. - All of Date Number One on Vimeo in several parts. - Both movies available in their entirety with the help of a new e-commerce solution for indie filmmakers that's in its beta phase - for those who want to contribute some $s towards the projects & or do not want to see the movies as separate episodes. - The same "new/expe
2 comments
Read more

The Limits of Taking Your Own Photo 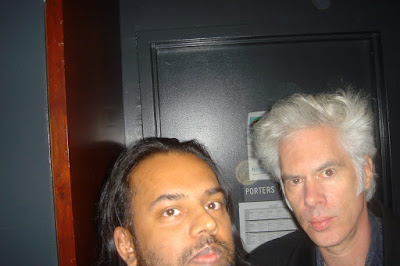 - April 24, 2009
From the Evening with Jim Jarmusch event presented by the Museum of the Moving Image. Copyright 2009 Sujewa Ekanayake
Post a Comment
Read more

On the way to Atlanta

- April 24, 2009
a scene from an upcoming sci-fi movie - a modern day location - the mcdonald's - is surrounded by a hologram/force-field emanating from the military installation inside the nearby mountain, creating the illusion of a late 1960's type (undeveloped/no buildings, wooden electricity poles, open highway, quality of sunlight, etc.) surrounding. one of the traverlers do not know this - trouble waits. * copyright 2009 sujewa ekanayake/wild diner films
Post a Comment
Read more

- April 23, 2009
An interview with French filmmaker Alain Cavalier, at Dizzidenz.com blog . From the interview: " You studied at IDHEC. What led you to move away from “traditional” narration to a purer style today? It’s the mental path you take when you’ve used a tool in a certain way, and suddenly you try something else. The narrative, the script, predictability, shooting the film, actors who take charge of their emotions, the crew, the production, the cost, our economic relationship with the world… freedom is strictly economic. All of that mixes together and eventually, with lighter and more refined equipment and tools, you manage to better define the scope of your work and avoid certain conventions you used to take pleasure in using. You don’t disown them, but they just don’t fuel you anymore. They don’t inspire you. And you sort of have the illusion of renewing yourself, that you’re following the successive metamorphoses of your life, and so are your films." Read the rest of the inte
Post a Comment
Read more

"Hanging out" with Jim Jarmusch tonight

- April 23, 2009
And by "hanging out" I mean I am going to the An Evening with Jim Jarmusch event tonight. Should be fun. Here's info. on the event from the Museum of the Moving Image website (it's sold out, but, you know, some people might not show up & there maybe some space so if you live in NYC & love Jarmusch movies, might want to show up & see if there are any "no-shows"/available seating): "SPECIAL EVENT An Evening with Jim Jarmusch Thursday, April 23, 8:00 p.m. At the Cantor Film Center, NYU 36 East 8th Street (between University Place and Broadway) Jim Jarmusch, whose brilliant and laconic style has made him one of America's most distinctive filmmakers since his debut with Stranger than Paradise in 1984, will participate in a conversation with clips moderated by Chief Curator David Schwartz. In addition to an exclusive look at scenes from his remarkable new film The Limits of Control, which was photographed by Christopher Doyle and has an e
1 comment
Read more

- April 23, 2009
A new interview with Amir Motlagh (his first feature Whale is now making its way across America in the form of screeners, soon to be at film festivals no doubt, see Whale trailer here ) at BRAINTRUSTdv . Here's a taste of the interview: " BRAINTRUSTdv You’ve said that L.A. doesn’t have a community of independent filmmakers like you’ve seen in New York. How does your isolation affect your working methods and the films themselves? Amir Motlagh It’s hard to find the same isolation that was afforded before the web. Now everything is displayed in lightning speeds on the web, and everybody knows what everyone else is doing. The connectivity is good, but is also problematic because of the insular nature of independent film and the interwebs. That’s why we are developing schemas faster then ever, to categorize and reference things that are immediate. To develop, some distance needs to be in place between the community and the individual. That’s why I have been largely absent from
Post a Comment
Read more

A post about the films of Thomas Imbach at Anthology

An article longer than most movie cab rides 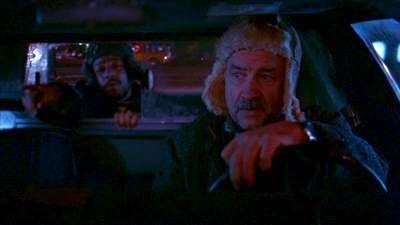 A long article at TMC's MovieMorlocks.com blog about cab drivers in movies, check it out .
Post a Comment
Read more 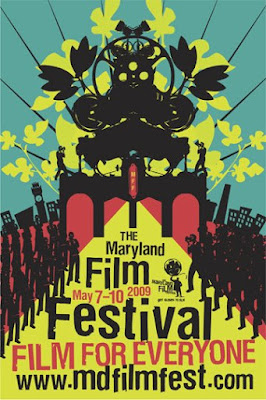 Here's a brief intro to the cinematic festivities that await you in Baltimore, MD next month: "Maryland Film Festival has announced its 2009 line-up, including Opening Night hosted by Bobcat Goldthwait and its Closing Night title, Kathryn Bigelow's Hurt Locker. The festival will take place Thursday, May 7 through Sunday, May 10 in beautiful downtown Baltimore, screening more than 40 new features and more than 80 new short films -- representing documentaries and narratives; live-action, experimental, and animated; domestic and foreign; underground, indie, and Hollywood. Opening Night (Thursday, May 7, 2009), as is a Maryland Film Festival tradition, we will spotlight a variety of short films, including new work by Eric Dyer (screening a work-in-progress), Jay Zimmerman, Michael Langan, Andy Cahill, Julia Kim Smith, Marc Kess, and Jim Jacob. Bobcat Goldthwait will host the event, and included in this program will be his own short Goldthwait Home Movies. The Closing Night
2 comments
Read more

CARTER screens in Brooklyn on May 23 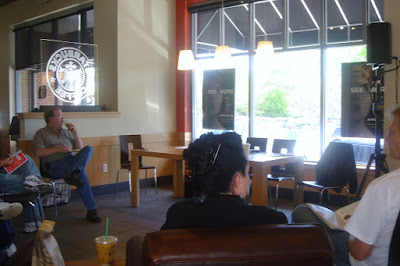