Many details left to work out, however, Indie Film Blogger Road Trip will be a part of Atlanta Film Festival 2009 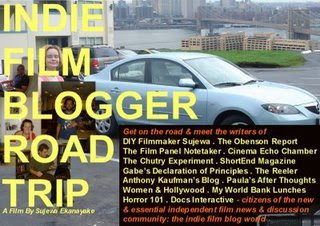 When the festival makes the official announcement in the near future, I'll link to it from here, but, for now, for those who are curious - my documentary about a slice of the film blogging community - Indie Film Blogger Road Trip - will be a part of the upcoming Atlanta Film Festival 2009 (April 16 - 25).

ATL fest plans on using the film to launch a conversation/gathering regarding film writing/ film criticism, & film blogging - an event that will take place at the festival.
IFBRT maybe made available by ATL fest on a limited on demand basis and on a limited web streaming basis.
The film will not compete in the festival because two of the bloggers profiled in the doc work for the fest (Gabe Wardell, Exec. Director & Paula Martinez, Managing Director).
So that's all the "news" I have regarding IFBRT & ATL fest at the moment. And, like I said above, will share final details re: IFBRT & ATL fest once all the details have been figured out & the official announcement is made by the fest.
In the meantime, I am very excited that IFBRT will be a part of Atlanta Film Festival & its conversation regarding the present & future of film criticism & writing and about the role film blogs & sites now play and could possibly play in the future in film culture, community, & industry. As someone who blogs about independent films, the event may give me some concrete ideas about how to further develop my blogging practices in the future so that my blogs can attempt to better fill various filmmaker, industry, community, & film consumer needs. IFBRT is an introduction to both a creative community & a conversation regarding the relationship between film writing on the web and making, distributing, & consuming films - specifically independent films. The ATL fest event regarding film writing on the web could provide more information - a greater variety of perspectives, questions, & answers - that maybe useful to many of us who are building the future of independent film through writing on the web.
Also, am looking forward to being at the ATL fest & experiencing both the wider festival & the event related to film writing. I enjoyed my visit to Atlanta in '08, when I was making IFBRT.
For more on the Atlanta Flm Festival, go here.
And for bloggers & other film writers interested in the festival's event about film writing, the ATL press office maybe able to answer some question now or in the near future.
See you in Atlanta in April!
- Sujewa

Click on the images below for the full episode 478 featuring all the guests.  Or see the YouTube video segment of Amir Motlagh segment only at bottom of page. *    * Info on the screening at Chicago Filmmakers here . - S
Read more

Apparently Eric Rohmer - a celebrated filmmaker in the art house film world - and his racist beliefs have been an open secret for decades.  I only heard about it last night.  See images and links below. Rohmer thought that only Europeans should make movies.  And he did not like multi-ethnic casting in movies.  Avoided casting non-white actors in his movies for decades - thus making his movies racist. There are plenty of other, non-racist, French and other filmmakers we can watch. Avoid Eric Rohmer movies - racism is a dangerous belief system - has lead to the death of millions of people in the past. From - paragraphs 5 and 6 -  https://artsfuse.org/152414/book-review-a-superb-biography-of-french-filmmaker-eric-rohmer/ From a new article by Richard Brody, paragraph 11 -  https://www.newyorker.com/culture/the-front-row/looking-behind-eric-rohmers-cinematic-style - Sujewa
Read more

Jack Kerouac reading from On The Road - a YouTube clip

- August 11, 2007
On The Road, one of my favorite books (I read it once every year), one that I found for the first time in the early 90's & which kept me from getting too sad during a Chicago winter, is turning 50 years old this year. In celebration here is a YouTube clip of author Jack Kerouac reading from his book: - Sujewa
Read more